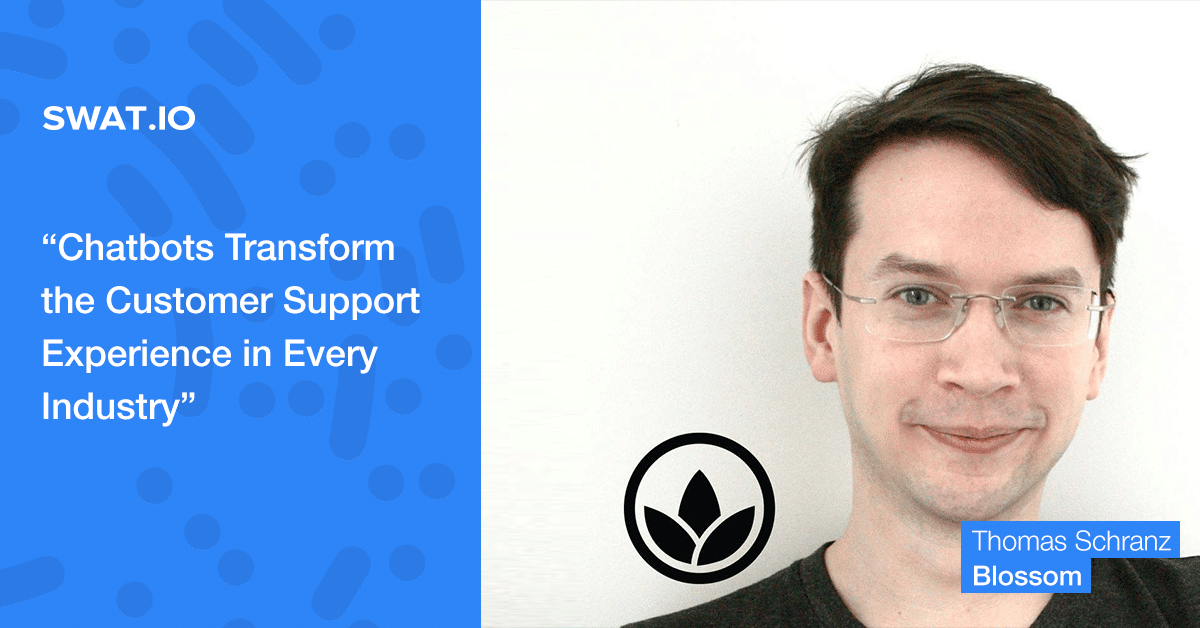 As part of our recently launched eBook about Chatbots, Conversational UI and the Future of Online Interaction, we interviewed Thomas Schranz, Co-founder and CEO of Blossom. Read his interview below and learn how to find the right balance between chatbots and human interaction in customer service.

1.What industry would face the greatest challenges when implementing a conversational UI-centric customer service? Why?

Thomas Schranz: I don’t see any particular challenge for a certain industry when it comes to adopting the messaging platforms to augment their customer support efforts.

That said, I think there will be some companies who will especially benefit from a transition towards these new channels. For example, companies that right now rely heavily on providing support via telephone and email will love the features that the messaging platforms have to offer.

Since the messaging platforms allow you to provide direct access to your customer relationship management – support, sales, and knowledge- systems, this enables a level of personalization like never before. Having this kind of context allows you to avoid unnecessary customer frustration like the need for customers to have their ID at hand as well as the specific names and types of products they’ve bought recently.

Also the scenario of customers having to repeat their whole story and customer specific information to every support representative that they get transferred to could finally become a thing of the past. On top of that, automated support systems work instantly, 24/7 and customers don’t have to feel bad when they ask a question multiple times.

It is worth keeping in mind that this transition doesn’t have to happen in one go. Companies can add these kinds of systems to existing customer support efforts to offer a hybrid approach or only use automated replies generated by a system as suggestions for customer support staff instead of immediately sending them out to customers. I think it is safe to say that this is going to transform the customer support experience in every industry.

2. To what degree would human interaction in customer service drop if chatbots handled most aspects of our lives, including entertainment?

Thomas Schranz: I think in the beginning customers will engage with support more than they previously had as the service is getting faster, more helpful and less frustrating. Also right now, there’s a long tail of people who are just too frustrated with customer support that they don’t even bother contacting support anymore.

This means automated systems that work well will enable you to retain customers that aren’t even bothering to engage with customer support right now.

Longer term I can imagine that the relative amount of customers needing support might decrease quite a bit as support systems get more and more intertwined with the products and services themselves. Eventually, there might be no real distinction between normal usage of a service or receiving customer support.

There’s this funny phrase by William Gipson “The future is already here, it is just not evenly distributed”. I think this is very true for automated customer support.

3. Is it absurd to think that chatbots could one day interact with one another? Could bots build other bots?

Thomas Schranz: We already use services that talk to different systems every day. For example, if we look at something like swat.io, where you have activity on social media, and swat.io is smart enough to pick that activity up and present it to the right person at the right time, that person can reply or act upon that, and then there’s activity that goes from swat.io back into social media systems. To make this happen, on the server-side there are already systems that more or less talk automatically to one another.

“It is similar with ordering tickets, booking a flight, watching Netflix or using Google.”

Eventually, I expect that we’ll get to more generic conversations between systems, where the use cases are not as narrow as they are right now.

Going forward, if you add more context and an ability where a system can interpret your intent, a bot will be able to do more generic stuff and can talk to another system that understands more generically and in a more flexible way what it can do for you, then there will be a lot of things happening that are difficult to anticipate right now.

When I search something on Google or when I ask Siri a question I get an instant answer based on a vast amount of information. Compared to these systems it would be impossible for a human to answer similar questions as well and as timely let alone about as many topics or to as many people.

Another recent example is Google’s AI which won against a GO grandmaster (Lee Sedol the second best GO player in the world). This basically means that there exists a system which is already better than basically every human living on this planet at playing Go and it can do that 24/7.

This is where we’re at. Software systems are already better than humans at a lot of things and they are already talking to each other at the speed of light. Quite fascinating.

4. Could you run us through the approaches companies should take when developing their first bot? What technology stacks and programming languages would you recommend? Is building a bot the right thing to do for someone who’s just getting started with programming?

Thomas Schranz: I think that if you’re just starting to learn how to program, right now is the best time to do it because it’s way easier than it has ever been, and you will see way cooler results way faster than if you started programming 5 or 10 years ago because there are so many existing software systems today that you can use as building blocks.

I would start with a very simple bot that runs on the Facebook Messenger platform because it saves you a lot of headaches in terms of UI, since Facebook takes care of that for you. This way you can completely focus on what you want your bot to do and get to results immediately.

As a company, I would start with a bot that only has one functionality or a very narrow set of use cases. This way you can immediately start to learn about the platforms out there and make sure that the customer experience is clear and easy to understand and then go from there.

In terms of the tech stack, I think what we’re seeing right now is that Python as a programming language is going through a revival phase. The native languages for mobile app development for a long time were Objective-C on iOS and Java on Android while you could use whatever language you wanted on the server side.

“Software systems are already better than humans at a lot of things and they are already talking to each other at the speed of light.”

With chatbots on most platforms, everything moves back to the server-side and there is more emphasis on languages that have good libraries for data analysis artificial intelligence in a broad sense. Like image recognition, natural language processing and so on.

Since Python is very popular among the academic community it not only has a vast array of libraries as well as scientific papers with example code in Python but also a strong culture of documentation and community support.

5. For the Lemmings.io product camp that’s taking place this summer you’ve put up small teams of people with different training and skills to create strategies around bot-based business ideas. What was the most surprising idea a lemming ever came up with?

Thomas Schranz: I think the most impressive and surprising outcome so far was the fact that compared to building web or mobile apps it is incredibly fast to build a useful chatbot application. Often at the end of a day, you already have something quite polished that actually works.

Another interesting angle is the fact that it is very easy to convert people who like your Facebook page into interacting with your bot. No install needed. I think in the near future we will see a lot of ads that will attract people to services that run solely as automated chat applications.

Thomas Schranz is Co-founder and CEO of Blossom, a project management and quality assurance tool used by software companies like Twitter, Drive Now, Netflix and NASA. He also runs Lemmings I/O which is the world’s first incubator focused on Facebook Messenger applications.

Want to know how to overcome the most challenging aspects when developing chatbots, what platforms are the most important and which tools you should use? Read Barbara Ondrisek’s interview: “When You Stop Developing Software, It Instantly Dies.” 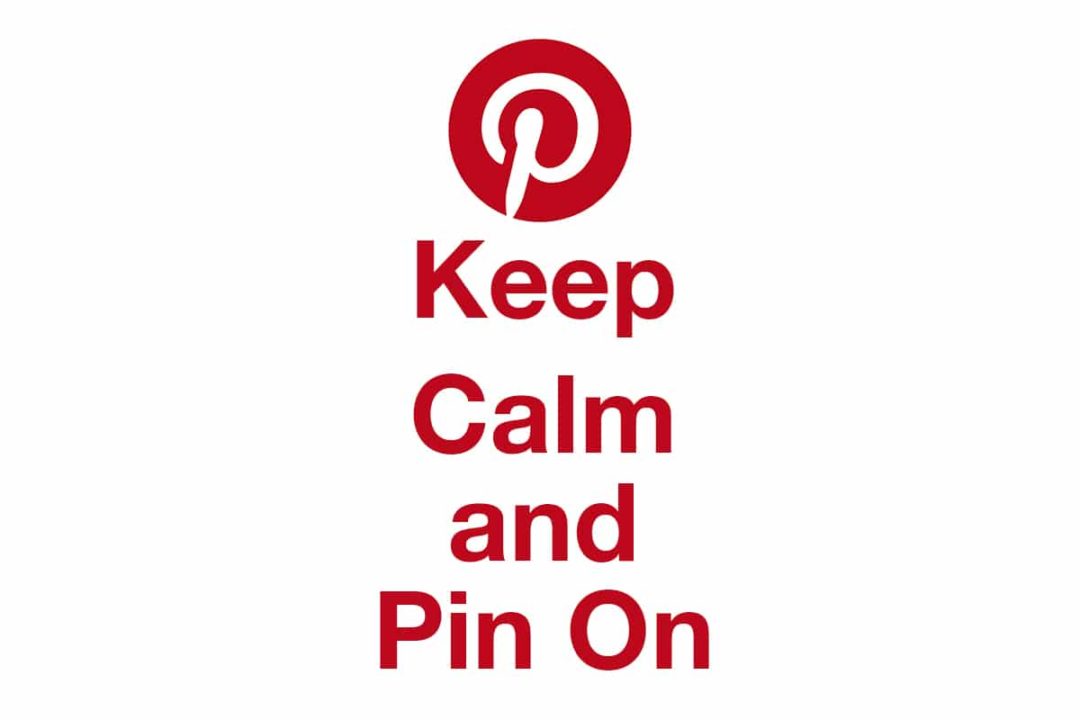 As we’ve highlighted in our eBook The Psychology of Social Media Marketing, Pinterest is more than a visual bookmarking tool. […]